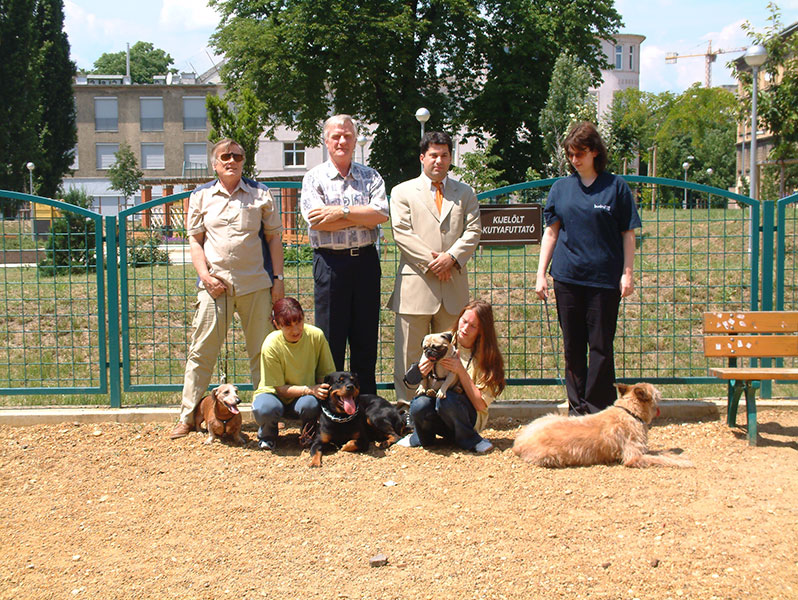 Objectives of the Dog owners’ safeguarding civilian association in Ferencváros:
The Dog owners’ safeguarding civilian association in Ferencváros was founded in 2002, as a non-profit, non-governmental organisation, to minimalize the distance between the dog owners and non dog owners in Ferencváros, in the 9th district of Budapest, capital of Hungary. There is one great social problems in the city of Budapest: dog shit on the streets. Thank goodness someone is trying to do something about the dog crap problem in this city, a problem that there is really no excuse for. The fact that most sidewalks do not have grassy strips and that so many people love dogs may be the reason that there are piles of dog crap- and just as worse- dog piss on every right angle imaginable.

Dr. Dávid Horváth (veterinarian, president) is the owner of three veterinary clinics in Budapest (Knézich Veterinary Clinic, Central Ferencváros Veterinary Clinic and Csepel Central Veterinary Clinic and animal cosmetics). These veterinary clinics and animal cosmetics were founded in 1997, 2001 and 2003. Up to that time he worked in the Internal Medicine and Surgical and Opthalmological Departments and Clinics of the University of Veterinary Science, Budapest, in the Animal Hospital of Morris Park and Animal Medical Center (New York, USA), in Straubing and Wemding (Germany) and in Vienna (Austria). The establishments of the veterinary clinics were based on the experiences in the University and on international veterinary congresses and visits of well run veterinary practices in Europe and in the USA. They tried to develop our conditions to reach a high professional standard, which has the greatest importance for us in their work. Three veterinarians and one qualified animal cosmetician do their work for the earliest recovery of the pets. Their work is supported by modern equipment (digital X-ray, colour doppler ultrasound machine, ECG, high frequency electronic surgical unit, ultrasonic scaler, digital scales, etc.) and they also have a very reliable laboratory partner. Hungarian, English, German and Italian languages are spoken by their staff. Among their references you can find the Embassy of Belgium, very well known actresses, actors, singers, musicians, directors, sportmen, etc. He participated in the organisation of several dog and cat shows, exhibitions and congresses. He is the owner of the Animalmedia company which’s profile is consultations connected with animals (production and companion animals, too), writing articles in magazines and papers (with pictures), etc. He has written more than 1600 articles in magazines and papers as references.

Dr. Sándor Benkó (electric engineer, honorary president) was the leader of the Benkó Dixieland Band. Formed in 1957, the Benkó Dixieland Band was one of most popular jazz groups in Hungary while also one of the best in the world. A truly world class ensemble whose very first album was a golden disk. Winners of a great many Hungarian festivals and competitions, the Benkó Dixieland Band has been honored with numerous awards. The group has played to tens of thousands, and some of the greatest international stars were invited to play with them on stage. Over the years, the guests have included Milt Jackson, Freddie Hubbard, Al Grey, Buddy Tate, Joe Newman, Buddy Wachter, Henry Questa, Joe Muranyi, Eddy Davis, Cynthia Sayer, Harry “Sweets” Edison, Albert Nicholas, or Wild Bill Davison from the United States as well as Chris Barber, Kenny Ball, Tony Scott, Huub Janssen, Acker Bilk and many others from this side of the Atlantic. The Benkó Dixieland Band went international way back in the sixties, first touring the Soviet Union, Poland, Czechoslovakia and East Germany. They were further afield by the seventies: winning the First Prize in Montreux in 1971 and the Grand Prix awarded by the public in San Sebastian in 1972. The prestigious English magazine, Music Week picked them as “Stars of the Year” in 1976. The eighties saw their first successes in America. In 1982, the Benkó Dixieland Band won the Grand Prix of the Sacramento Jazz Festival in California. In the same year, they were honored by an official recognition of the California State Assembly. In 1983, they received the title, “International Jazz Band of the Year” in California and their excellence was recognized by two consecutive California Governors, Mr. Jerry Brown and Mr. George Dukmenjian. In 1987, they received a distinction from Mr. Ronald Reagan, then President of the United States who expressed his gratitude on behalf of the American people for the Benkós being such outstanding ambassadors of American Jazz in the world. In 1998, Sándor Benkó received the European Inter-LYRA Prize, a distinction awarded by the international community of musicians for his outstanding contribution to music. With several golden disks to their credit, they received an award for lifetime achievement from Hungaroton, the Hungarian Record Company in 2001. The Hemingway group put them on its Wall of Fame in 2002. The Benkós were fully appreciated also in Hungary. Himself recognized with a LISZT PRIZE and State Award, Sándor Benkó and the group received from the hands of then President Árpád Göncz the Officer’s Cross of the Order of the Hungarian Republic in 1997. In 2004, the Benkó Dixieland Band was awarded the PRIMA Prize, in 2004, the PRO URBE Miskolc and in 2005, the PRO URBE BUDAPEST distinction. The Benkó Dixieland Band played some 200–250 concerts every year in Hungary and abroad. They have released 64 albums and have had a total of 110 hours of television show time. The interviews and other TV programs in which they feature were annually seen by 600 million viewers in the world. Their regular international tours have taken them to the most different countries of Europe, America and the Far East where they have been received as traveling ambassadors of both Hungary and New Orleans jazz. What a wonderful combination!